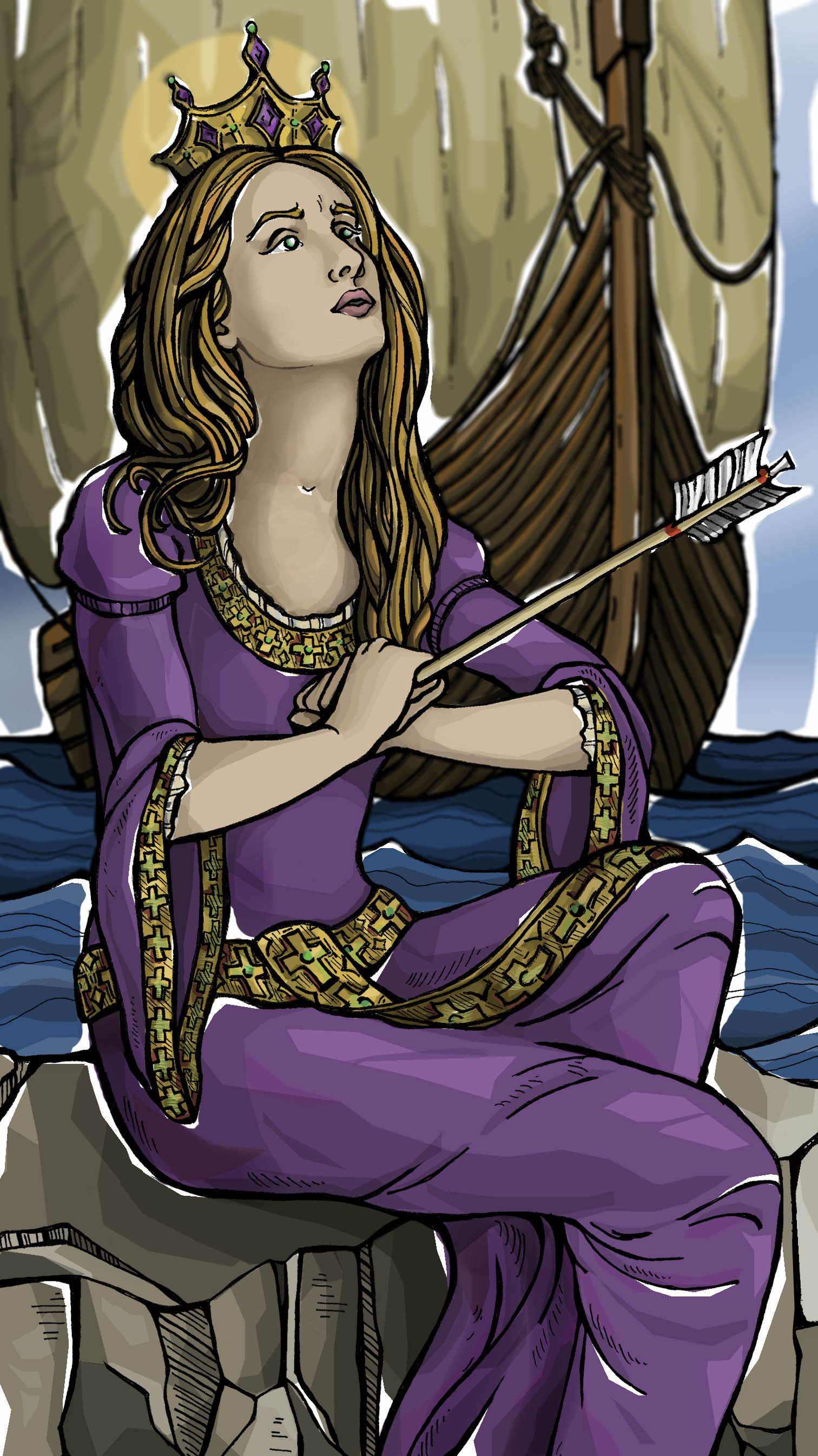 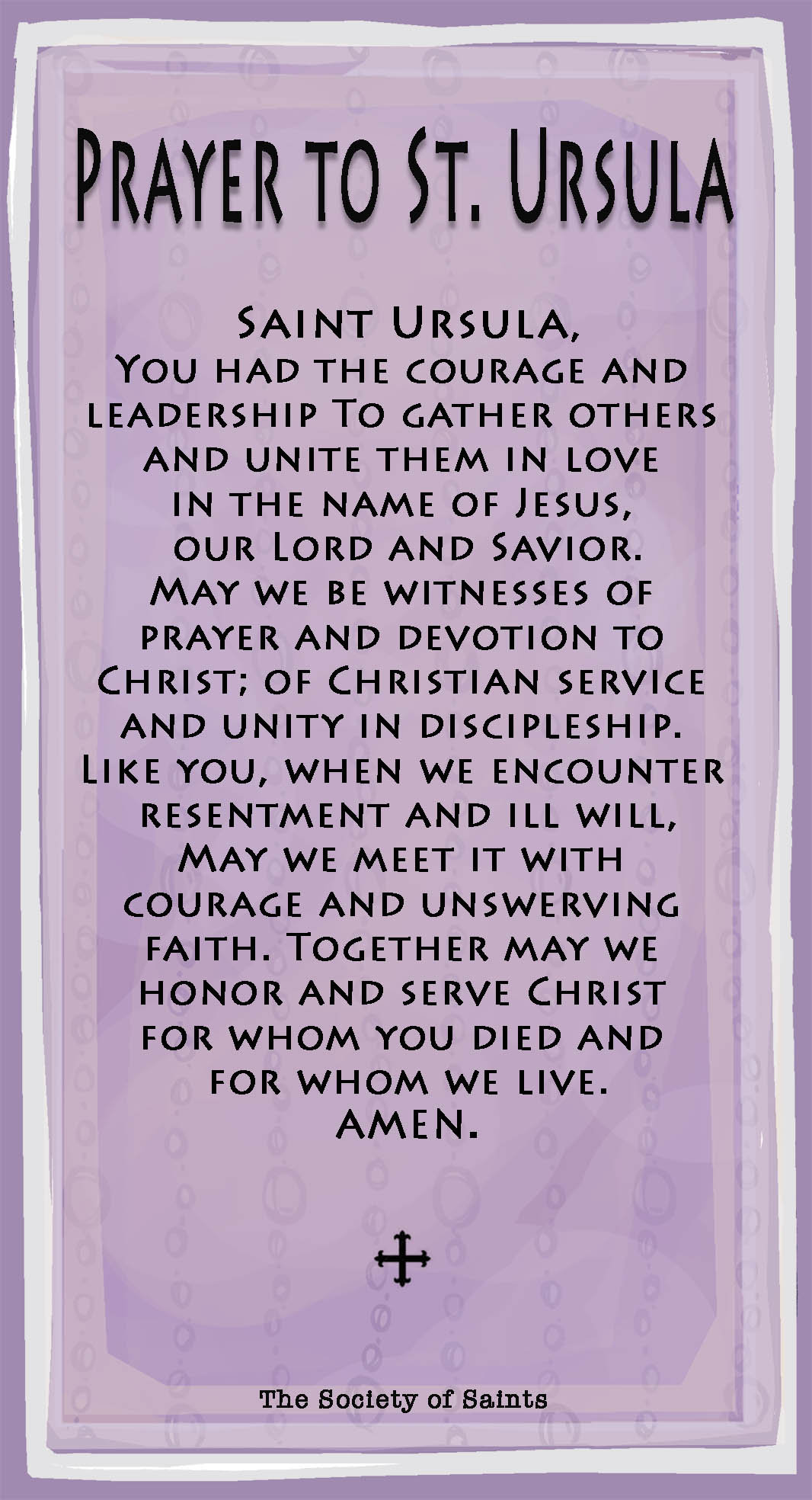 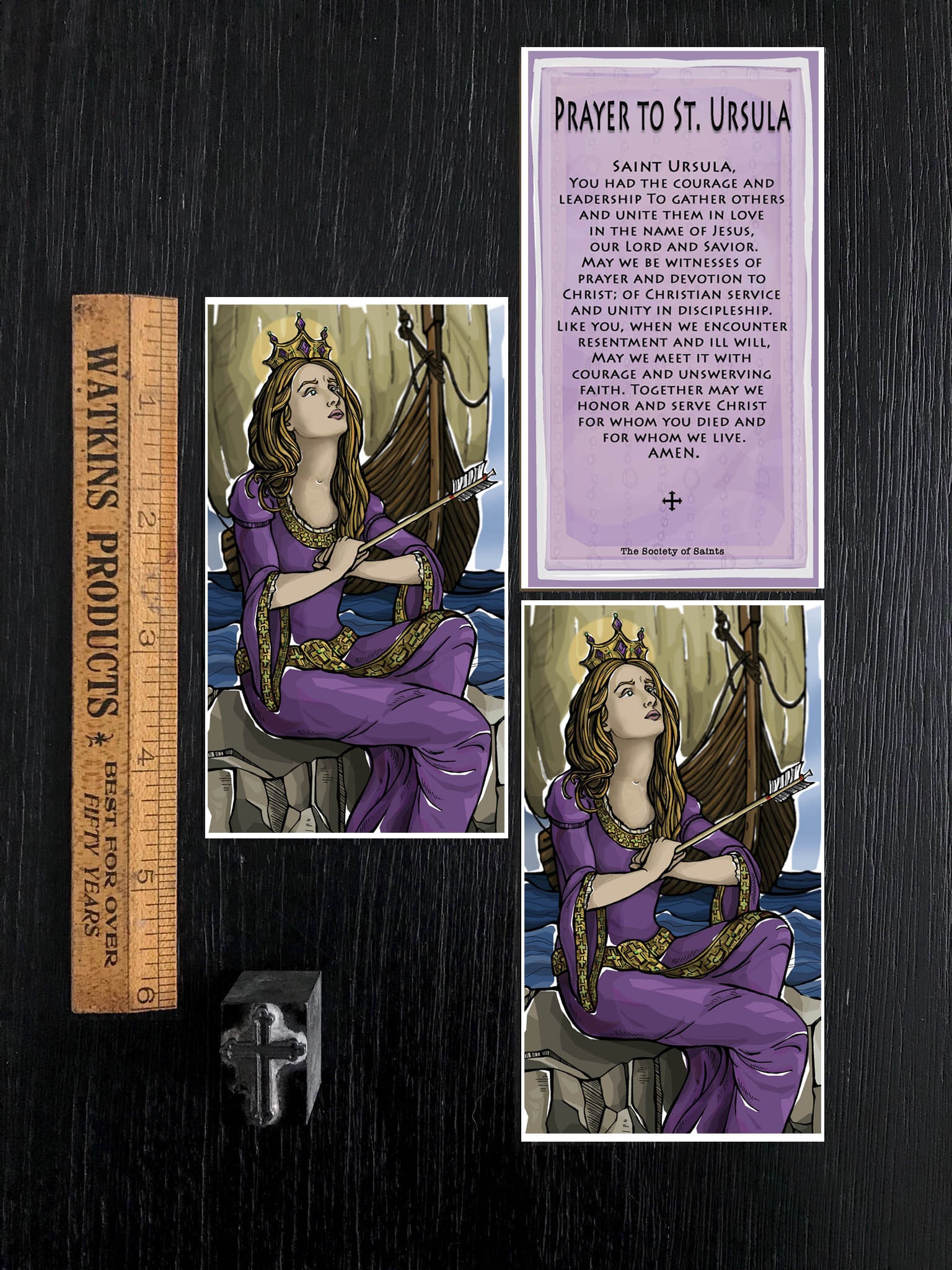 St. Ursula is the patron saint of Catholic education, holy death, female students and teachers. Her feast day is October 21.

Ursula was the daughter of a Christian British king. The stories of her life are based primarily on 4th or 5th century carved stone inscriptions that hang in the church of St. Ursula in Cologne, Germany. There are also a few small details about her found in ancient liturgical documents.

Legend has it that Ursula, born into nobility, was given 10 maidens as companions when she was a young girl. The 11 of them traveled on 11 ships, each accompanied by 1000 companions. They sailed to Rome, and on their return they were detained in Cologne by the Huns. There they became martyrs, tortured and killed for their faith. The leader of the Huns, taken by Ursula’s beauty, offered to spare her if she would become his wife. This she denied and in his rage he killed her, shooting her in the heart with an arrow.

A possible twist to this legend is the belief that the 11,000 number resulted from a misreading of the term “11M” in the stone inscription. This may have indicated 11 Martyrs — Ursula and her original companions — rather than the Roman numeral “M” which represents 1000. But ancient manuscripts do refer to the martyrdom of thousands of maidens, and exact history is unclear. But it sure makes for a good story, eh?

However, despite the possible misreading, devotion to the martyrs grew quickly. The Order of Ursulines, founded in 1535 by St. Angela de Merici, took St. Ursula as their namesake. The Order is especially devoted to the education of Catholic girls.

Card size is 2.5 x 4.5 inches.
Prayer cards are nice little reminders to take small moments out of our hectic days for reflection. Perfect to use as a bookmark, stick in a mirror, or anywhere eyes will happen upon it, and a great little thoughtful item to tuck into a card for a wee gift to mail.

~Miss no single opportunity of making some small sacrifice, here by a smiling look, thee by a kindly word; always doing the smallest things right, and doing all for love.~ St. Therese of Lisieux

She absolutely loves the picture and prayer of St. Ursula.

Lovely art. Very thoughtful extra items. Thank you so much!

Sent to a teacher who appreciated artwork.

My little girls loved this prayer card, and with the sturdy laminate it will hold up to their eager handling!