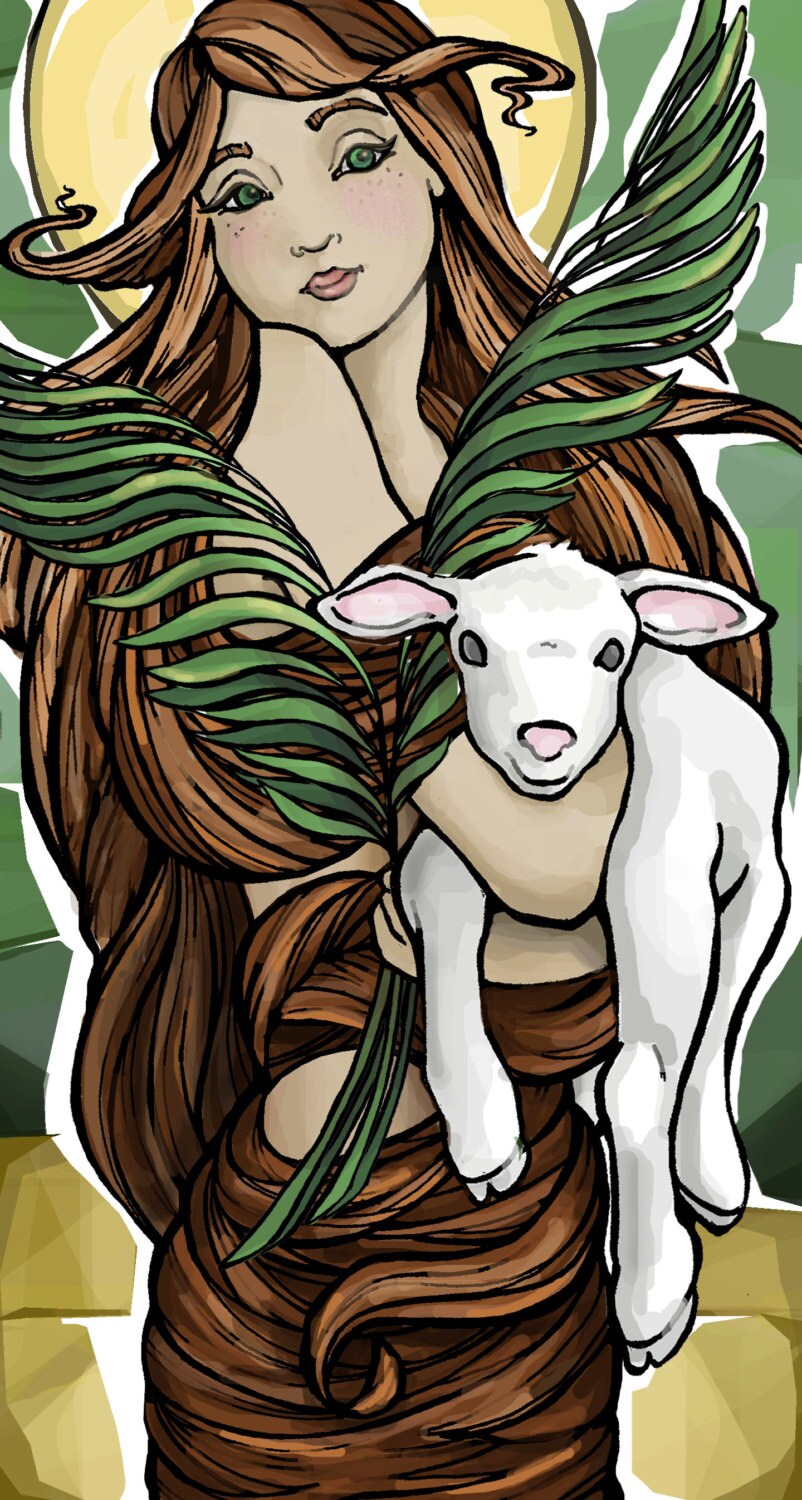 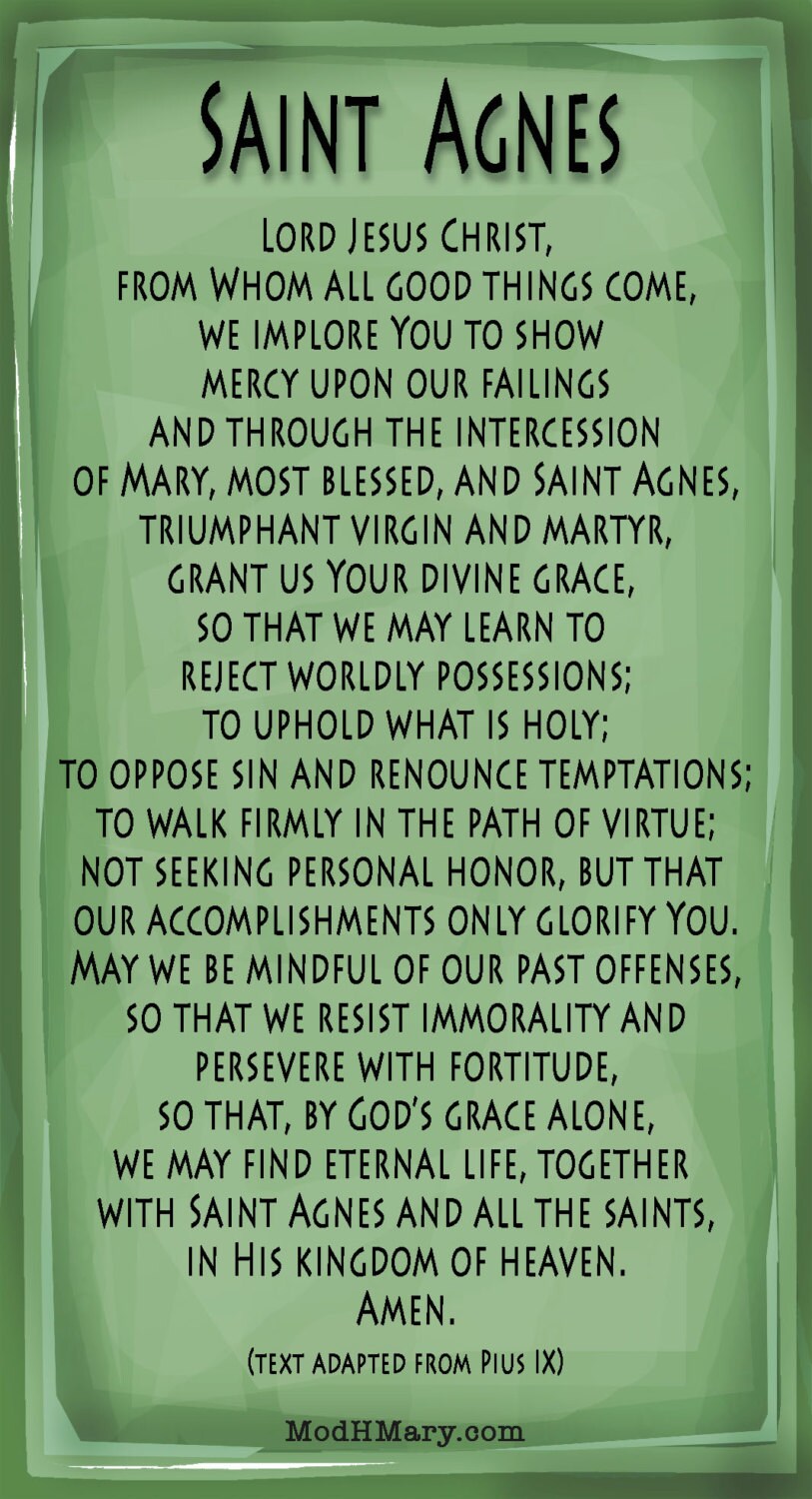 As written in the Golden Legend in 1275, the young and beautiful Agnes became the object of devotion of the prefect of Rome’s son. Agnes was offered riches by the perfect if they would marry but Agnes had already consecrated herself to Jesus. The perfect threatened to expose her as a Christian and was ordered to be taken to a Roman temple to make an offering to Athena. She refused to submit and as punishment was stripped naked and thrown into a brothel. The men who visited, out of respect, did not dare to look at her, except for the prefect's son. He mocked the sensitive men and pushed his way inside and attempted to cast his eyes upon her where he was immediately struck blind. Some stories state that her modesty was kept intact because her hair had grown down around herself or that her hair was long enough to cover her body. Another account was that an angel appeared with a white gown to clothe her.
When the prefect heard what happened to his son he ran to the brothel, accusing Agnes of cruelty and enchantment, whereupon she prayed for the young man and his sight was restored. There are a few other variations to the story but they are all pretty much keeping with the same theme.

Agnes is depicted in art with a lamb, as her name resembles the Latin word for "lamb", agnus. The name "Agnes" is actually derived from a feminine Greek adjective meaning "chaste, pure, sacred”.

Her feast day is the 21st of January, and she is the patron saint of girls, gardeners, engaged couples, virgins, Children of Mary, and the Girl Scouts, to name a few.

Card size is 2.5 x 4.5 inches.
Prayer cards are nice little reminders to take small moments out of our hectic days for reflection. Perfect to use as a bookmark, stick in a mirror, or anywhere eyes will happen upon it, and a great little thoughtful item to tuck into a card for a wee gift to mail.

~Miss no single opportunity of making some small sacrifice, here by a smiling look, thee by a kindly word; always doing the smallest things right, and doing all for love.~ St. Therese of Lisieux

Beautiful, purchased in memory of my daughter. Gorgeous.

This St. Agnes prayer card is lovely, the colors are rich and the style is serene. The lamb has a very cute expression on its face and St. Agnes is featured with a simple golden halo that adds a nice touch. The composed prayer message is moving and personal and well centered on the back.

Such beautiful prayer cards ! I purchase two, one for me and one for my bestie and we were both astonished and so pleased : this is probably one of the most beautiful depiction of Saint Agnes I've seen in my life, and the prayer is very useful. Love the pocket size that can be carried around ! The package was soooo sweet, with a handwritten note, a "how to pray the Rosary" card and even a beautiful temporary tatoo ! Definitely going to order more cards here. Thank you so much Elise for this, May God bless you abudantly !

Beautiful and modern-looking prayer card. Perfect gift for my niece who is choosing Agnes for her confirmation name.